What started as just another Rotary project in the year 2000 to manufacture and install corrugated roofs for homes in East Timor, has become an amazing success story.  The East Timor Roofing Project (ETRP) has roofed many schools, orphanages, community and commercial buildings and homes for East Timorese, manufactured. over 2,000 water tanks and in excess of 1,000-grain silos, and provided training for local East Timorese trainers, who themselves have trained over 250 East Timorese in building and administration skills.  Over 1,250 tonnes of steel has been used to make the roofing and associated products.  Equally amazing, the committee, with members from the Rotary Clubs of Doncaster, Lilydale and Melbourne, has been working methodically for over 13 years to ensure the project remains viable and to change direction when required to meet the needs of the local people. 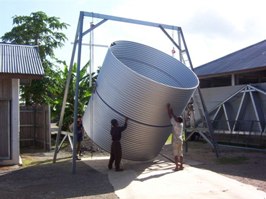 A 27,000-litre water tank for the Island of Ata Uro, This was the largest tank made by ETRP

Beginning as a Rotary Australia World Community Service (RAWCS) project, the ETRP was initially low budget, but in 2005 it gained a government contract for schools to produce trusses.  With increasing government and local commercial work, it became a financially viable business and later the committee decided to register it as a company, East Timor Roofing and Training Unipessoal Lda., in East Timor.  A holding company in Australia, East Timor Roofing Holding Company Ltd was formed at the same time.

In 2012, a case study was prepared on this pioneering project to help identify the key achievements, benefits and learnings of the ETRP.  The 11 critical success factors that were recognised are shared below.

For clubs looking to embark on major projects, either in their local area or internationally, we hope these critical success factors are useful in guiding planning and provide an example of ‘what worked’. The full case study can be found at: